History has proved that South Korea exports are a good leading indicator of global corporate earnings, meaning that global EPS growth may fall to low-single digit or even negative in the next 6-12 months, which is much lower than the 6% global EPS growth for 2019. On the occasion of Sino-US trade talks, the Standing Committee of the National People’s Congress completed the second trial of the Foreign Investment Law draft, which aims to protect the Since the beginning of January 2019, the Asia’s exporters start to feel pain of falling export growth on the back of supply-chain disturbances triggered by U.S.-China trade war and a cyclical slowdown in the global economy, in particular China, which hit the trade-reliant region. South Korea was the first to set an alarm to the region which reported negative export growth in two consecutive months as January export further slipped by -5.8% YoY after a -1.3% decline in December last year. The negative growth was a surprise to the market, especially semiconductor export in January plunged by -23.3%, which looks worrisome for the already cooling technology sector.

South Korea publishes trade data earliest globally and its export growth has a high correlation to the export growth of other Asian economies, with recent data show that except for Malaysia, the key major Asia countries showed either slowing or negative growth for their latest export numbers (figure 1). However, this weakening momentum may go for another 2-3 months as there is still no early signs that neither the Chinese nor global economy is recovering soon. Lacklustre global demand is affecting the merchandise exports of China, and in return hurting Asia’s exporters as China has been a major importer of primary goods in the region. On the other hand, China’s slowdown has led to falling domestic consumption growth and as a result, countries like Japan, Korea and Taiwan are seeing deteriorating export of consumer products to China in recent months. The Nomura’s Export Leading Index is suggesting that Asian aggregate exports for 10 countries* in February will remain negative, and in fact it could be even worse as the impacts of “front-loading” exports from China to U.S. due to the potential tariff may be more significant that many expected. Figure 2. Asia ex-Japan’s total export growth decline to negative when it fall below 61 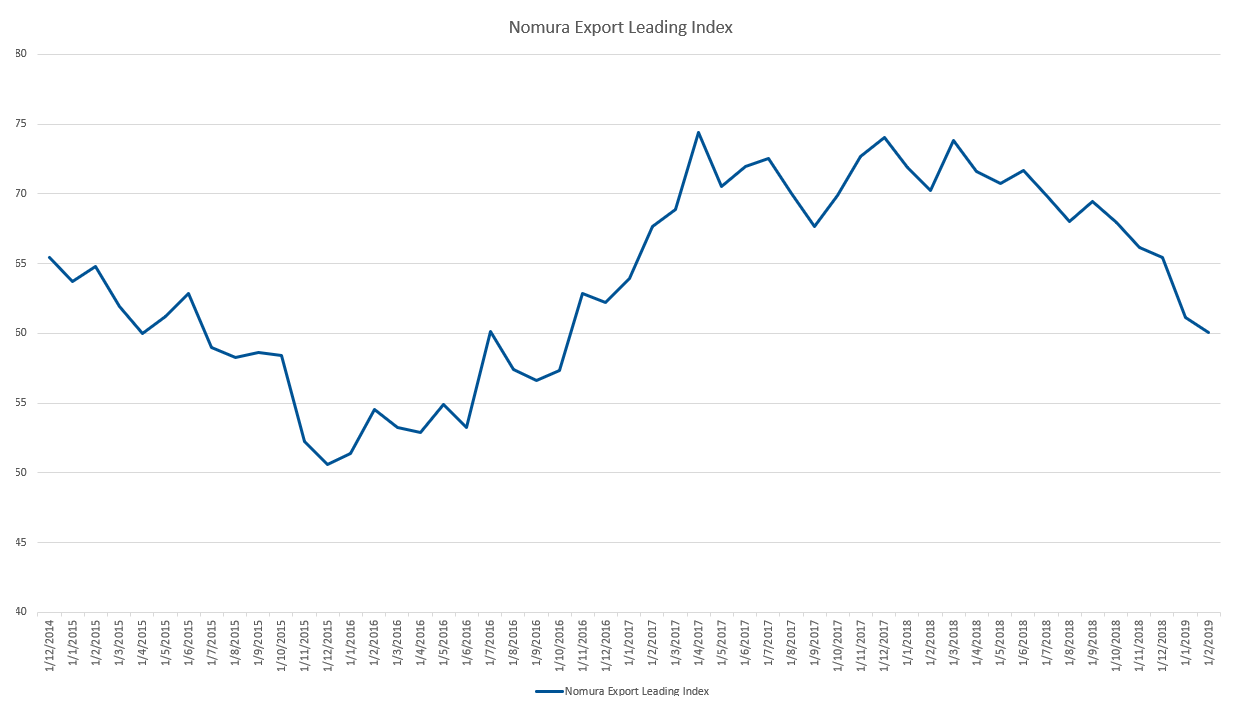 Despite weakening export growth in the region, Asian stocks markets have rebounded strongly by +6.8% since the beginning of January as markets start factoring a recovery of exports from 2H18 amid some positive news-flow related to US-China trade negotiation. However, we are cautions on the current rebound as the sustainability of export recovery is questionable, if any in our view. Besides, history has proved that South Korea exports are a good leading indicator of global corporate earnings, meaning that global EPS growth may fall to low-single digit or even negative in the next 6-12 months, which is much lower than the 6% global EPS growth for 2019.