Is current oil price undervalued relative to the fundamentals?

After the collapse and volatile late-2018, exacerbated by low liquidity, Brent crude oil prices have had a strong rally since the Christmas Eve. It was mainly driven by the news that OPEC and allied oil producers including Russia to cut production by 1.2 million barrels per day (bpd) and will take further action when necessary. On the demand side, Chinese stimulus and trade talks between official from the US and China has brought hope for a more stabilised global economy in 2019. So, after increased by 15% YTD at around $61/bbl, the key question: the current price levels and term structure remain undervalued relative to the fundamentals?孑

A recent research from Goldman Sachs looks relatively positive in first glance and says it won’t be “hoodwinked” again on commodities and suggests investors to buy into this year’s comeback story in oil. According to his top-down global oil demand growth model, the oil market (Brent at $57.06 when the report issued) only pricing in a global GDP growth at 2.5% YoY in 2019, which is much below its 3.5% forecast and still excessive even if accounting for the December activity indicators that global GDP growth may down to 3.2%. Besides, given the fiscal strains, OPEC would likely cut the production more if global GDP really disappoints to that level. On the demand side, it forecasts 2019 global oil demand growth of 1.4 mb/d (assumes global GDP growth at 3.3%), with a 60 kb/d downward revision to Chinese demand growth, while EM demand outside of China, such as Brazil, Turkey, South Africa and Russia will recover in 2019.

Figure 1.  Production was down from November before the cuts are even implemented 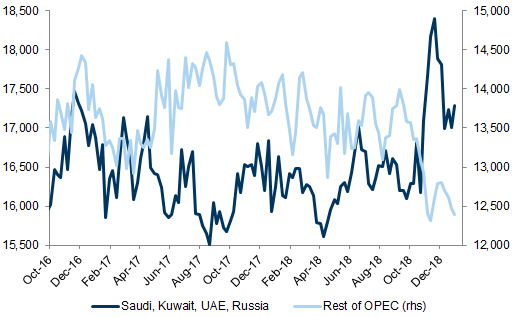 However, on a 1-year and longer term prospective, the report actually suggest a more cautious outlook and expects the earlier than expected new pipelines to release the low-cost Permian basin into the global market in 2H19, requiring a lower marginal cost to balance the oil market in 2019. In addition to a higher inventory levels from the start of 2019, the low-cost production capacity is also increasing globally, plus the capacity in Permian Shale oil rises even faster amid weaker than expected shale cost inflation.  What’s more, the delayed long-cycle projects in Brazil and Canada is ramping up too.

All in all, forecasting the crude oil supply and demand is not easy for both professionals and individual investors, in particular US is the only source of up-to-date inventory numbers and the rest of the world is comparatively opaque regarding its inventory and production level, and some  producers always adjust their production much earlier than the news released. In fact, a different way is to look at the degree and the slope change of the contango/backwardation (i.e. an upward/downward sloping forward or future price curve) in the oil market as an indicator of whether or not prices have hit bottom or peak. It could be more reliable as the forward market is generally participating by the oil majors that indicate the actual demand and supply of long term. 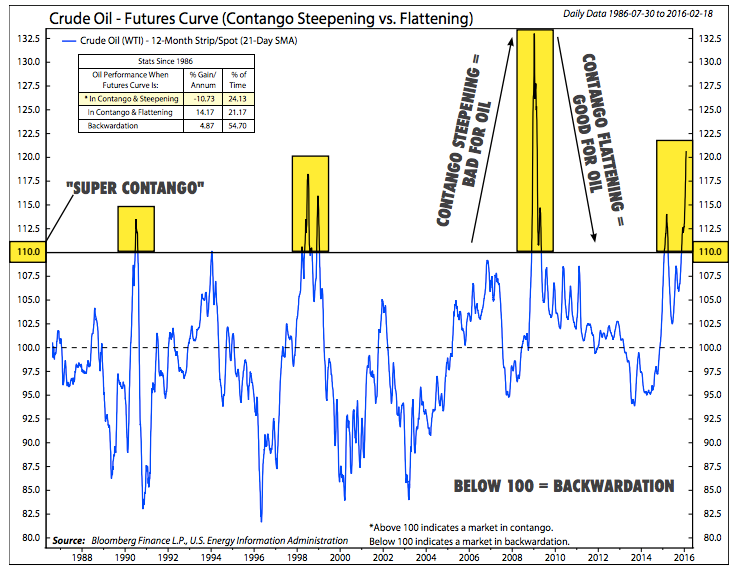