Only God makes no mistakes, but everyone does, so as every investor. Making a mistake in investment may not be very scary, but repeating that mistake could be worrisome to your future, while minimizing the number of mistakes or less major mistakes always differentiate between a good and bad investor. One way to minimize investment mistake could be to first understand why we invest the way we do, as a well-stated problem is always a half-solved problem. Behaviour finance, a very popular phase in the investment world over the last twenty years, using a different approach than conventional financial theory, which combines cognitive and behaviour psychology with finance and helps explain various irrational decision that people make. Behaviour finance is a complement of knowledge of how markets work, rather than a replacement for traditional financial theory.

In conventional financial theory such as capital asset pricing model (CAPM) and the efficient market hypothesis EMH), which holds that participants in markets are principally “logical and rational” behaviours, requiring compensation for an additional risk being taken. EMH theory suggests that price of an asset, such as a stock in an efficient market reflected all available public and private information and investor is unlikely to outperform the market consistently as shares always priced at fair value.  Therefore, it is unlikely for a “rational” investor making a “mistake” in any circumstances as all investors are price takers only.

However, in reality world, investors rarely behave according to the assumptions made in traditional finance theory. We easily observe irrational price movement of a single stock, even for a large cap stock such as Facebook with share price increases or decreases by more than 5% a day without any fundamental changes. Another irrational observation is that investors are always arguing of being late for catching up with the wave of the hottest stocks. However, in just one week, share prices plunged by more than 30% but investor accumulated his position further given the “positives” conclusion from the research he did and the current price was much cheaper than the share price peak. Later, situation getting worse as share price dropped by another 40% in one month and investor lost all his confidence and would like to sell the stock as soon as possible. After the stock sold, share price rebounded gradually with positive news coming out, and this is a classical “buy high and sell low” story for many investors. This example is very common in particular when investors are in the late stage of a bull market, with rising volatility and prices could deviate considerably from the “fair” value. These types of market anomalies are some examples that cannot be explained by traditional financial theory.

Thus, a different discipline – “Behaviour Finance”, as suggested by two cognitive psychologists, Kahneman and Tversky (considered by many as the fathers of behavioural finance) in late 1960s, focuses on how psychological bias affects human decision in the financial market. Richard H. Thaler, who is the 2017 Nobel price winner in economics, further explores “the consequences of limited rationality, social preferences, and lack of self-control,” which then explains how these humans’ errors systematically affect decisions making and market outcomes. Thaler has emphasized that economic agents are actually human, so economic models should take account for human behaviour. 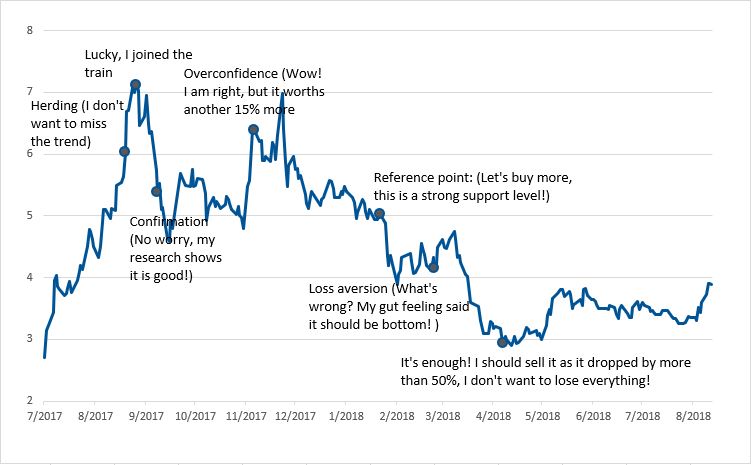 Herding effect, which is very common for investors in less-matured market such as China, often sell and buy stocks at the same time, driving up the market volatility. Investors that fall into the herd bias generally has little experience or expertise in that area and they tend to follow the actions of a larger group since they don’t want to fall behind of the majority or there is a strong social pressure afforded to conformity. The result of herd bias could cost you substantial amount of transaction costs as market noise drive you in and out of different investment. Another possible outcome could be you are too late to enter the herd and also too late to exit. The worst outcome could happen if the herd’s investment was totally wrong and you are unable to exit it as share was suspended. For instance, all investors face some temptation to follow the latest and hottest investment trend. The key to avoid herd mentality is to always study the investment before buying into any trend, and make sure that this comply with your investment principles and strategies.

Confirmation bias is another very common behaviour as investors selectively favouring information which confirms previously existing beliefs and overlook others which contradict it. Analysts or fund managers are also easily fall into this bias as they put more efforts on searching the investment positives than looking into the negative sides of the investment. Since investors weight information differently, a subjective conclusion will be easily come out as a result of one-sided information and this could lead to a wrong investment decision-making. Besides, confirmation bias is always inter-correlated with overconfidence. An overconfidence investor always exhibits confirmation bias, while the supportive information will likely further strengthen his confidence level and making this as a vicious cycle.  As a result, investor may trade more frequent than he should or he may even accumulate the falling shares despite fundamentals have actually changed into an opposite direction. Overcoming confirmation and overconfidence bias is always not easy. Be wary of these biases could be the first step, while looking for multiple contrary evidences could be another useful skill. Investors should always be open to alternations and refine the decision made.

Behaviour finance also suggests that investors are loss aversion, meaning that many investors are more sensitive to loss than to risk and return as they want to avoid the feeling of regret after making decision with a negative outcome. As a result, investors may take less risk because it minimizes the potential for poor outcomes. Another possible outcome is investors tend to hold losing investment longer than it should, while selling the winning stocks earlier in order to lock-in profit. Besides, investors exhibit with loss aversion may also subject to mental accounting bias. According to Thaler, investors don’t treat all of their money in one big pool. Instead, they have separate mental accounts based on personal goals and tend to segregate gains and integrate losses. Failing of treating all the assets as a whole meaning that investors may not be able to maximize the return and diversification benefit as the correlation of different assets have not been considered. This is a very common bias for many investors, as their assets are actually not as diversified as he believes.

Nevertheless, there are many more behaviour biases in real world. Understanding behaviour bias does not guarantee that investment mistakes will be totally avoided, but it allows you and your portfolio manager to aware your own bias, and to develop a more tactical and strategic investment policy statement.  We may not be able to cure the biases, but we can attempt to mitigate their effect and takes corrective measure.