China has been suffering from debt problem in recent six to seven years. In the Central Economic Work Conference last December, the government unexpectedly talked about the leverage problem and regarded deleveraging as one of the most important tasks in 2017. We noticed that the central bank made more efforts to strengthen regulation and even tightened monetary policies by rising short-term bond repo rates. In fact, although there have been some improvement and reforms, the Chinese economy is still dependent on real estate and infrastructure investment funded by credit growth. Should we worry about the negative influence of credit growth under deleveraging?

Leverage of the financial system

To start with, the Chinese government mainly concerns about the leverage of financial institutions. Theoretically, leverage is a good factor for real economy. But if leverage is out of control, it becomes the source of bubble problem. Shadow banking made the problem even more complicated as leverage growth is not closely monitored by regulations, which are often outdated.

The key risk right now is the maturity mismatch between assets and liabilities in financial institutions. In the past two to three years, fixed income investors enjoyed profitable returns during the rate cut cycle. Many non-bank financial institutions, including security brokerage firms and fund management companies leveraged up to purchase longer-maturity corporate bonds funded by short-term money from banks. Some city commercial and rural financial banks, lacking deposit base with few customers, also borrowed a lot of money from SOE banks through interbank market. Net interbank lending has already grown to 300% of GDP (12-month rolling total).

Net Interbank Lending as % of GDP 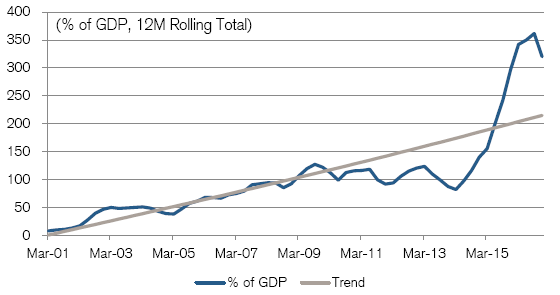 Potential rate hike cycle unfolds the risk of leverage. Higher yields lead to lower bond prices but higher funding costs. It is dangerous when the market deleverages without enough liquidity. As a result, regulation is a must.

Deleveraging by tightening interbank liquidity or regulation is likely unwinding the real economy. Based on Credit Suisse estimates, the correlation of 7-day repo rate and expected yield of 1-year wealth management product has risen to 60% since 2013. It reflects that short-term rates have significant impacts on funding costs for all banks.

However, the impacts to credit growth is limited. The correlation of short-term yield to total social finance and credit is lower. Although private sector may concern about borrowing costs, SOEs and local governments pay less attention to the cost comparing to credit availability.

In 2017, we do not believe deleveraging is a risk as credit growth does not slow down too much. Although we notice less household loans from property mortgage beginning of the year, there were more corporate loans from infrastructure investments. Stable growth is also a higher political priority compared to deleveraging before an important political event this year.

After 2017, deleveraging might be addressed by the new administration. First of all, it would be a political decision to cut GDP growth target rate. Only lower growth target can leave room for lower credit growth. Secondly, we will see a large scale of credit write-off and debt equity swap program. All the parties should bear the cost of default. In the long run, more equity finance is the only way to deleveraging in a healthy growth model.