Emerging markets selloff have pushed the Indonesia Rupiah to its weakest level since the 1998 Asian Crisis. As of 7th September, USD/IDR increased to 14868, and Rupiah depreciating 9.4% this year. 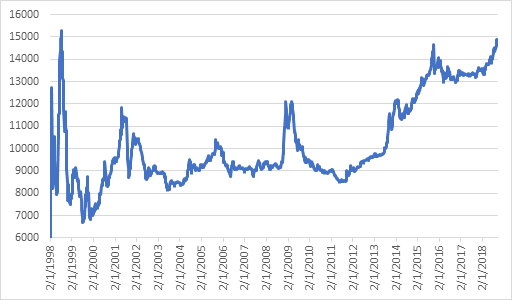 The rupiah has shed nearly, making it Asia’s second biggest losers against a broadly strong dollar. In stock market, the Jakarta stock market is one of the worst performances in Asia, with losses of around 10%. In bond market, the benchmark 10-year government bond yield has risen this year to the highest level since 2016.

Many Asian emerging markets have current-account deficits. The deficits economies mean they rely on foreign inflows to finance their import needs, make them vulnerable to a slump in sentiment and money flows. Indonesia government also has a budget deficit, which lead to an external debt on finance. Right now, foreign capital owns almost 40% of Indonesia government bonds, which is the highest of Asian emerging markets. Based on the Reuters data, the equity market has seen outflows of 3.68 billion US Dollar so far this year, compared with an exit of 2.96 billion US Dollar in 2017.
Active central bank can defend rupiah

Indonesia is better placed to defend rupiah than before. Foreign-exchange reserves are bigger, and its external debt is lower. Although government may focus on shrinking a current account deficit, 2018 GDP is still around 2.5% by central bank forecast, compared to 1.7% last year. The central bank also proactive. Bank of Indonesia has raised policy rates four times this year, and it has regularly intervened to support the local currency.

Investors may suffer more EMs pains if safe-haven momentum continues. However, we do not believe EMs face a systematic and contagion risks now. Betting on continued momentum is also not a good risk/reward choice. Investors should keep a cool head and prudent when facing trade noise.